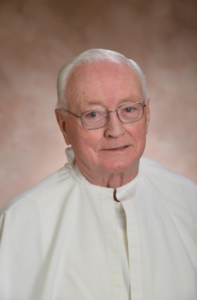 Fr. Mulrooney was born on June 23, 1931 in Rhinelander, WI to the late Frank and Catherine (Morrison) Mulrooney.  His home parish was St. Peter the Fisherman, Eagle River, WI.

While he resided at St. Norbert Abbey, he assumed the roles of Mission Procurator, Vocation Director, and for many years was the Director of the Mail Campaign. For 12 years he worked as an assistant to the Vice President in the Office of Development at St. Norbert College. He received the Distinguished Alumnus Award from Duquesne University during that time.

Over the next few years, he completed a program in Clinical Pastoral Education at the Alexian Brothers Medical Center in Elk Grove Village, IL. In 1988, Fr. Mulrooney received certification by the National Association of Catholic Chaplains. Subsequently, he served as a chaplain at St. Vincent Hospital, Green Bay, WI, where he spiritually administered to the needs of many people.

He was preceded in death by his parents; two brothers: Michael Mulrooney and Francis Mulrooney.

Visitation will be held at the church of St. Norbert Abbey, beginning at 9:30am on Monday, October 4, 2021 until 10:15am. Please enter through the main Church doors only. Masks are encouraged for those attending.

Burial will be in the St. Norbert Abbey Cemetery at a later date.

The Norbertine Community would like to thank the nurses and staff at St. Norbert Abbey and everyone at Unity Hospice who cared for Fr. Mulrooney.