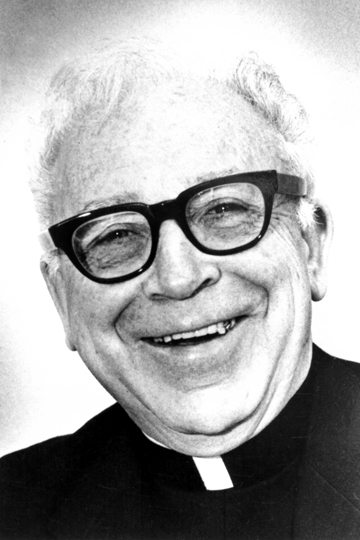 For Christmas 2016, in a touching tribute to their confreres who have passed into God’s Eternal Kingdom, members of the Norbertine community placed a Christmas wreath on each headstone in the St. Norbert Abbey cemetery. Below, several Norbertines share their thoughts about the headstones they selected and the impact that these respective Norbertines had on their lives.

I chose to remember Fr. Guy Guyon, O. Praem. († December 4, 2003), because of my delightful times with him designing sets for his musicals. Several shows hold special memories:

We spent 6 a.m. to 8 p.m. Saturdays, from dawn to dusk, on-stage creating the sets, after which we adjourned to the priory kitchen to cook dinner together.

At rehearsals Guy sat in the top row of the balcony and would yell at the cast, “I can’t hear you!” He refused to use mikes or employ stand-in actors, in case someone became sick! Being a thespian myself I asked him not to be so hard on the kids. He complied as best he could.